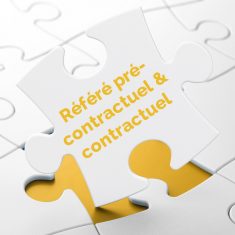 Rule n ° 1: details on the qualification of an unacceptable offer

An offer that fails to comply with the stipulations of a collective agreement must be regarded as disregarding the legislation in force and is therefore unacceptable within the meaning of Article 35 of the Public Procurement Code.

A company excluded from the award of a procedure-adapted contract had brought an action against the contract concluded between the large maritime port of Martinique and the society Action security and fire to perform services of fire safety and assistance to the person. Initially, the Conseil d'État considered that the judge of the interim administrative court of Fort-de-France had made an error of law. According to the High Court, it could not be inferred that the tariff proposed by the Antillean security company disregarded the legislation in force, which would have made its offer unacceptable and that the lack of knowledge of the obligations to advertise and implement the competition it alleged would not have affected its chances of securing the contract.

It appears here, incidentally, that the non-respect of the applicable rules and especially of a collective agreement by a company applying for the award of a contract is liable to make its bid unacceptable.

Rule 2: confirmation of the absence of a minimum period between the notification of the rejection decision and the signature of the contract in adapted procedure

Reminder of the rule made by the Conseil d'Etat (very questionable in passing) according to which in the matter of adapted procedure, the contracting authority or the contracting entity is not required to respect a minimum period between the notification of the decision of the rejection and signature of the contract.